I mean the title in both ways–1) Fuck This Day Wherein Christopher Columbus is Celebrated and 2) Instead of Celebrating Him, We Should Say FUCK COLUMBUS.

Read, with source material, about yet more of Columbus’s atrocities.

As American Indian activist and scholar Ward Churchill says in his talks, recorded on his seminal 2-disc CD “In a Pig’s [please excuse the speciesist language] Eye:  Reflections on the Police State, Repression, and Native America” (click HERE to learn more/buy from its publisher, AK Press):

…on that day…on the 12th of October, 1492, when a lost Italian seaman, flying the flag of Spain, washed up on a beach in the Carribean, half a world away from where he thought he was, and got himself known as “The Great Navigator.”  Yeah.

You can actually listen to the amazing, inspiring, incredibly informative talk by Ward Churchill in several parts on YouTube HERE!

Ward’s passion and uncompromising militancy is an inspiration to nearly all who hear him speak and many who read his work.

Columbus was the real savage:  he tortured native peoples to try to convert them to Christianity, he enslaved them, he murdered them, and he raped native women.  So this country proudly celebrates a TORTURER, ENSLAVER, RAPIST, AND MURDERER of innocent, peaceful native peoples.  What the FUCK is wrong with this culture??

Oh yeah–this culture is sociopathological.  Look at the people we celebrate and elevate to hero and even near-deity status.  It’s not just Columbus, not by a long shot.  Take our your purse or wallet and look at your different denominations of cash (if you have any in this economy!); the 1-dollar-bill, George Washington:  slave owner, American Indian butcher–a number of tribes helped the American colonists in their fight against the British in the Revolution, and then after the dust settled Washington ordered those tribes be destroyed for supposedly aiding the British!  He owned slaves his entire life, and when the U.S. capital was in Philadelphia, he exploited a loophole to keep his slaves when normally they’d be freed after 6 months of living there.  He also signed the Fugitive Slave Act of 1793, which was one of the most horrendous laws ever put on the books for slaves; it gave southern slaveowners the right to capture and bring back south “their” slaves even if those individuals were able to escape to and settle in “free” northern states.

Now take out your 5-dollar-bill.  That’s right, even “Honest Abe” has some answering to do for his legacy.  He didn’t care about freeing slaves; his concern was with preserving the Union.  “The Great Emancipator”–my great asshole!  Granted, he did claim to be morally and politically opposed to slavery, and never owned slaves, BUT–and this is a big deal–he repeatedly said that he had *no intention or desire to free the slaves in southern states.*  Lincoln said–and this is a direct quote:  “My paramount object in this struggle is to save the Union, and is not either to save or to destroy slavery. If I could save the Union without freeing any slave I would do it, and if I could save it by freeing all the slaves I would do it; and if I could save it by freeing some and leaving others alone I would also do that. What I do about slavery, and the colored race, I do because I believe it helps to save the Union.”

In the interest of brevity, we’ll skip ahead and finish up with that elusive 20-dollar-bill.  Andrew Jackson is probably the worst of the lot.  He owned a vast (over 1,000 acres eventually) plantation that was mostly cotton, worked by slaves; estimates vary, but in all likelihood he owned several hundred at some point in his life.  He also initiated the cultural and physical genocide of American Indians by displacing them from their native lands (think Trail of Tears), stealing literally tens of millions of acres from them, forcing them ever westward to make way for white settlers.

These are the motherfuckers we CELEBRATE?  This is truly equivalent to Germany having a “Hitler Day” which is a national holiday where we’re all supposed to laud him as the “Great Conquerer” or something, with statues of him erected all over the country.  This country is INSANE.  Because it’s a part of the dominant culture, industrial civilization, which is killing the planet and wiping out vast, unfathomable numbers of nonhuman species and human indigenous cultures.  It must be stopped.

And Columbus Day is a symbol of that insanity, that sociopathology.  So join me in screaming from the rooftops, FUCK COLUMBUS DAY!!!!! 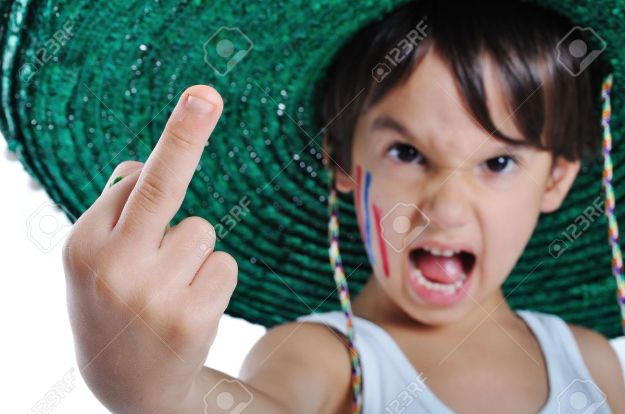 “Fuck Columbus & All Other Cannibals!” This kid gets it–why can’t the rest of Amerika?

SIGN UP FOR MY MONTHLY E-NEWSLETTER! SIMPLY PROVIDE YOUR EMAIL ADDRESS.

Double-amputee Max and his Vietnamese girlfriend Mai burn for revenge on the corporation whose chemical defoliant Agent Orange decimated their lives. A wild, shocking, hilarious journey through the dark underbelly of mid-1980s America.

Purchase Orange Rain by clicking above! "If you yearn for a world where despicable behavior has immediate and devastating consequences, Mr. Smitowicz has your number."

The Environmental Revolution starts here! An eco-thriller in the grand tradition of Edward Abbey’s “The Monkey Wrench Gang”

What Have I Done For You Lately?

For Some Reason People Seem to Particularly Enjoy These Posts

Browse Specific Post Categories I.e. Narrow Your Reading Parameters (If You So Choose)